The Choice in Education Governance Debates: Complacency or Reform?

In a recent article in Education Next (“Locally Elected School Boards Are Failing,” Summer 2022), I argued the Covid-19 pandemic has made salient a critical flaw in our public education system—that our dominant school governance model is largely designed to serve the interests of adults, rather than the students public schools actually serve. In reviewing a large body of recent academic literature on this topic, I concluded this is largely because only adults vote in local school board elections and the subset of adults with the most skin in the game—parents of school-aged kids—represent a relatively small voting bloc, allowing other interests to play an outsized and often pernicious role in the process, creating perverse incentives for elected officeholders.

In their response, the authors of “Are Locally-Elected School Boards Really Failing?” speak up in defense of this governance model. Their arguments are nuanced and thoughtful, but ultimately unpersuasive. And while elements of their critique do highlight subtleties that deserved more careful consideration and discussion in my original essay, I believe they also largely misunderstand and this misrepresent my key arguments. So I’m grateful for the opportunity to respond. 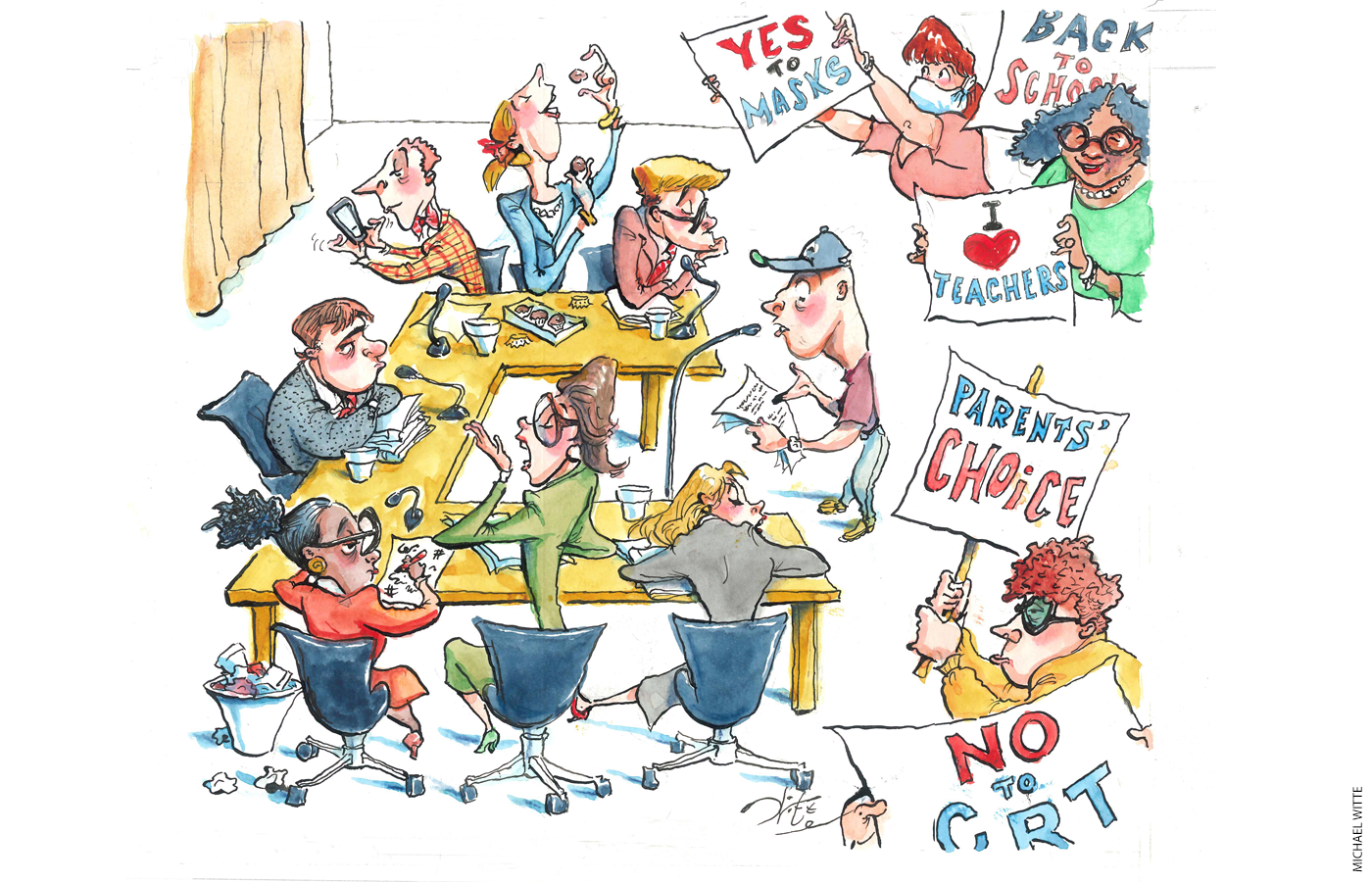 In the authors’ telling, my argument is that local politics allows “the moral concerns of adults” to interfere with the “the educational needs and interests of students.” And in its place, that I advocate for abolishing locally elected school boards (in their words, “scrap[ping] democratic school governance”) and replacing them with a market-based model that “will diminish the means available to local and regional communities for developing shared visions for student growth and flourishing in light of local conditions, public priorities, and assets.” Yet neither is a fair nor accurate summary of my position.

While I do mention “moral concerns of adults” in tracing the historical origins of our system of local school control—dating back to the Old Deluder Satan Act passed by the Puritans in the Massachusetts Bay Colony in the 1600s—my criticism of the current system is much broader. It is not just moral concerns but also adult partisanship and racial politics that have infiltrated modern education policy debates, and I argue that these developments have come at the expense of education quality. Such dynamics were clearly on display during the pandemic, when the partisanship of (mostly childless) adults rather than local public health conditions were the single best predictor of which public schools reopened for in-person instruction at the beginning of the 2020-21 school year. I suspect few readers would agree that a system in which the political agendas of adults drive education policy, often to the detriment of kids, is a model of healthy and legitimate “value pluralism” the authors seem to endorse.

In advocating for reforms, my prescriptions are also relatively light touch. As I write in the conclusion of my original essay, “Such reforms should include holding school-board elections on cycle, when participation among parents is highest; reworking accountability systems to ensure that district-performance ratings emphasize each school’s contribution to student learning rather than the demographic mix of students it serves; and timing the release of school ratings to coincide with school-board election campaigns.” This is hardly a wish list of a market-obsessed neoliberal out to dismantle public education and destroy local control.

Yes, Education is Multi-Dimensional, But…

A key premise of my essay is that improving student academic achievement is a central (but not exclusive) purpose of public education. This position is perhaps most eloquently summarized by a recent memo written by a school governance coach working with the San Francisco Board of Education:

For those who disagree with the above premise—which perhaps includes the authors to whom I’m responding—the remainder of my original essay and the policy prescriptions that follow from it are probably not their cup of tea. Fortunately, I believe that both stated and revealed preferences of most voters are on my side.

For example, according to the latest Education Next public opinion survey, two-thirds of Americans say that schools should prioritize academic achievement over student “social and emotional wellbeing.” (Although these numbers dipped temporarily during the pandemic, they never fell below 50 percent.) In her analysis of California school board elections, political scientist Julia Payson also found that voters hold school board members accountable for student academic achievement as measured by test scores—but only during high-turnout, on-cycle elections when the electorate is most representative and when parent participation in local elections is highest.

To be sure, test scores are hardly the only metric of a quality education. Indeed, recent research suggests that schools’ contribution to non-cognitive outcomes—skills such as self-regulation, executive function, and persistence—are probably even more important determinants of students’ long-term success. And there is certainly room for reasonable disagreement about the optimal way to balance academic considerations with other dimensions of student well-being—such as emotional and psychological—and collective societal goals, such as promoting citizenship and pro-social values. However, few would argue that academic considerations, as measured by test scores, should play absolutely zero role in public education. That these considerations do appear to play zero role in low-turnout, off-cycle local school board elections—the modal system currently in place—is thus strong grounds for concern about the health of local democratic institutions.

Perhaps even more importantly, metrics constructed from test scores already play a big role in other, non-electoral contexts. Parents look to them when making school enrollment decisions. Homebuyers look to them when shopping for homes. Unfortunately, the most salient existing measures, which focus on proficiency rates or student achievement levels, do not actually isolate aspects of student academic performance over which schools have control. Instead, they largely reflect the demographic composition of students local schools serve. Developing and publicizing alternatives that increase the salience of school contributions to student learning, which I advocated for in my original essay, offer an important improvement on the current metrics, which encourage racial and class segregation and exclusionary school attendance boundaries.

The absence of any relationship between student achievement and most local school board election outcomes does not appear to be driven by consensus among parents or voters about the (lack of) importance of test scores. The authors offer a second explanation: students and their parents are not the only stakeholders that local school districts are expected to serve. They write:

Students aren’t the only ones who benefit from public education. Local and regional communities have a serious stake in their schools, and gauge their success far more broadly than can be captured by student standardized test scores. Public schools are valued for many reasons, among which is their function as community hubs, providing a means to discover shared educational interests that are locally and regionally distinct. … School boards are a form of governance that enables us to work through our legitimate value pluralism from community to community, allowing localities to weigh and balance academic performance among the other educational goods valued by the school or district.

While the authors are almost certainly right in a descriptive sense that school boards must weigh multiple, often-competing considerations, I believe this is a bug, not a feature, of our existing governance system. To understand why, consider applying their argument to other policy domains.

Suppose that a municipal water system is constantly producing outbreaks of waterborne illness, such as cholera or dysentery, because local public officials believe the primary purpose of the system is to provide well-paying job opportunities for favored constituents, not delivering clean and safe drinking water to local residents. (This is not an uncommon occurrence in many developing countries, where government jobs are seen primarily as a form of political patronage, not a mechanism for providing vital public services.) Or suppose that the local fire department cannot respond in a timely manner to calls for service for most residents, causing building to burn down, because too many agency resources are diverted to keeping open under-utilized fire stations in sparsely populated parts of town, where fire houses are considered important “community hubs.”

Or take the authors’ own example, San Antonio Regional Hospital, whose board of directors is made up of largely non-medical professionals. Suppose the board spent most of its time ensuring that doctors are satisfied with their pay, that insurance companies aren’t complaining about billing rates, and that various politically connected local contractors are getting their fair share of hospital construction contracts, while spending almost no time examining data on patient health outcomes and preventable medical errors. Imagine further that the board continues to be reelected—and, indeed, many board members run unopposed—even though the hospital routinely provides substandard medical care to its patients. (This is obviously a hypothetical; I have no special insights about the quality of care provided by the San Antonio Regional Hospital!)

I suspect few readers would view these scenarios as evidence of vibrant and healthy local democracy, characterized by “legitimate value pluralism.” Yet they are rough approximations of local education governance in many communities. What would be characterized as misguided priorities and instances of interest group capture in almost any other policy domain are routinely accepted as legitimate considerations in education policy debates.

Against Complacency in Education Governance

In my reading of the authors’ response to my original essay, I am struck by what comes across as complacency with the status quo. “There is nothing to see here folks,” the authors seem to say, “move along.”

That school board members are reelected regardless of how well local schools are teaching students to read or do math must mean that the community just doesn’t care about test scores. (Never mind that nearly three-quarters of voters support annual standardized testing.) That many school board incumbents face no opponent must mean that voters are happy with their current performance. (Never mind this is the same argument dictators who win reelection with 97 percent of the vote often make.) That most voters seem to like local democratic control in surveys is evidence that this is the optimal way to govern public education. (Never mind that the majority of the same voters also endorse alternatives such as home schooling and many of the market mechanisms the authors deride, such as universal school vouchers.)

The bottom line for me is simple: If the authors are correct and current education governance institutions work just fine, then the modest reforms I recommend in my essay—on-cycle elections, improving academic performance metrics to isolate school contributions to learning from demographic composition, and making these academic measures more salient—won’t matter much. But if I’m right, reforms that increase the political influence of parents, give them more proportionate voice in local democracy, and better align the electoral incentives of officeholders with the academic interests of the students their schools serve could make a big positive difference. With the downside risks seemingly minimal and the upside potential significant, it is hard to justify complacency over modest but meaningful governance reform.

Vladimir Kogan is associate professor at The Ohio State University.

The post The Choice in Education Governance Debates: Complacency or Reform? appeared first on Education Next.

Best way to teach your child to read

The Best Preschool In Skudai, Johor - NO. 1 | Unrivalled | World class